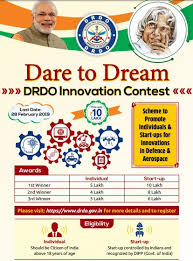 The Defence Research and Development Organization (DRDO) has launched the innovation contest ‘Dare to Dream 2.0’ on the 5th Death Anniversary of the former President Dr APJ Abdul Kalam. It is launched on his death anniversary as he was known as the missile man of the country and he had the vision of self-reliance.

The ‘Dare to Dream 2.0’ contest has been launched for emerging technologies to promote the individuals and startups for innovation in defence and aerospace technologies in the country. This comes on the backdrop of the ‘Atmanirbhar Bharat’ call given by the PM Narendra Modi.

It is an open challenge to promote innovators and startups in the country. The winners of this competition will be decided after due evaluation by an expert committee. The award money of Rs 10 lakhs will be given to the startups whereas for the individual winners will get an award of Rs 5 lakhs in this competition.

The first edition of the ‘Dare to Dream’ Contest was organized in 2019 with the objective to unearth disruptive ideas and concepts in emerging technologies identified by the DRDO helpful for enhancing the capabilities of the defence sector in the country. The areas of focus were: