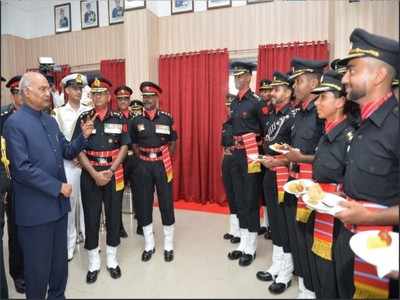 The award was provided on the occasion of 25 years of army air defense college.

A Rashtriya salute was provided to the Supreme Commander during the program. The President is on a two – day visit to Odisha with his wife Savita Kovind.

The air defense was in existence since 1940. However, it got recognition as an independent arm only in 1994.

It is an active corps of Indian army that are tasked with the air defense. They are responsible for the protection of Indian air space below 5,000 feet.

In world war II, the Indian air force played an important role in stopping the advance of Japanese troops in Burma. During the mission, the troop first targeted Arakan base. The strike mission then continued to attack other Japanese bases at Chiang Mai, Mae hong Son.

It was the first operation of the troop in the world.

In 1962, during the Sino – Indian war, the military planners failed to deploy IAF against the Chinese forces. This resulted in losing a significant amount of advantage to the Chinese.

However, in 1965 when Pakistan launched Operation Gibraltar to infiltrate Kashmir, the IAF carried out independent raids against PAF (Pakistan Air Force) bases. This helped to win the second Kashmir war against Pakistan.

It was the first operation of the troop in India.