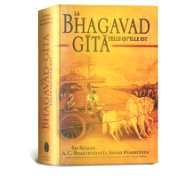 A first of its kind conference on the contemporary relevance of the Bhagvad Gita was held London, United Kingdom.
The conference was organised by Indian Council of Cultural Relations (ICCR) and High Commission of India. It was organised in in collaboration with the Department of the Study of Religions at the School of Oriental and African Studies (SOAS), University of London.
The conference aimed to deal with the innumerable questions that exercise and confound through Bhagvad Gita and help to tap unique transformational energy.
During this conference, Indian and British experts came together for the understanding of Eastern mysticism.  Experts and historians from India and Britain also came together for the two-day sessions which included various aspects such as Impact of Bhagvad Gita on Modern Sanskrit Writings, Bhagvad Gita and Yoga and The Bhagvad Gita – Timeless Values for Today.