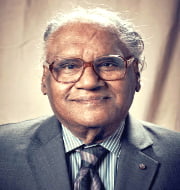 Eminent scientist and Bharat Ratna awardee Chintamani Nagesa Ramachandra Rao was conferred with Japan’s highest civilian award the Order of the Rising Sun, Gold and Silver Star.
He was bestowed with this award for his outstanding contributions to science and Indo-Japanese science cooperation.
Rao is a National Research Professor, Linus Pauling Research Professor.
He is also the Honorary President of Jawaharlal Nehru Centre for Advance Scientific Research, Bengaluru and a former Chair of the Japan-India Science Council.  In 2014, he was awarded with India’s highest civilian award of India Bharat Ratna along with cricket legend Sachin Tendulkar.
As a renowned scientist, he has published more than 1600 research papers and has authored about 50 books. He has been bestowed with about 70 honorary doctorates and also has received the highest civilian award from several nations.
He is also an elected member of almost all scientific academies across the globe. He also had served as Chair of the Scientific Advisory Council to Prime Ministers of India.