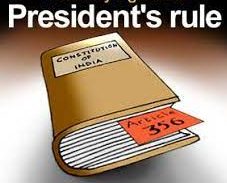 The Union Cabinet has approved the proposal to impose President’s Rule in Puducherry. This proposal was approved days after the Congress-led government in the union territory lost power after a vote of confidence.

The President’s Rule in India is the suspension of state government and imposition of Union government rule. The President’s rule is imposed in accordance with the Article 356 of the Constitution. It is imposed when a state government is unable to function as per the Constitutional provisions.  Following this, the executive authority is exercised by the centrally appointed governor. The governor can also appoint other administrators to assist them. Under the President’s rule, the council of minister is dissolved and the office of chief minister is vacated. Also, the Vidhan Sabha is either prorogued or dissolved and it is reconstituted only after the election. As of now, Chhattisgarh and Telangana are the only states where President’s rule has not been imposed.

Vote of no confidence

It is a statement or vote regarding a person in a position of responsibility when that person is no longer deemed fit to hold that position. The person is declared unfit for the position when they are inadequate in some aspect and are failing to carry out any obligations.