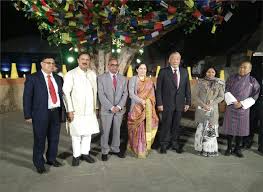 India hosted “Bodhi Parva: BIMSTEC Festival of Buddhist Heritage” at New Delhi as part of celebrations of 20th Anniversary of BIMSTEC. The Festival was inaugurated by Minister of State (IC) for Culture Dr. Mahesh Sharma.
The festival was held at IGNCA, Janpath (Indira Gandhi National Centre for the Arts. It had diverse components including exhibition of​international and Indian Buddhist art and ​architecture, discourses by eminent ​scholars and practitioners of Buddhism​,​ guided meditation and chanting by Buddhist monks and ​choir, dance and music performances, screening of ​film on Buddhism and a food ​trail​.

Emphasise and raise awareness of Buddhism, a rich and common heritage and mark the 20th anniversary of BIMSTEC. To spread universal message of peace and tolerance practiced by Buddhism to address growing sense of inadequacy in face of changes and conflicts that people and the world face.

BIMSTEC is international organisation comprising of India, Bangladesh, Myanmar, Thailand, Sri Lanka, Nepal and Bhutan. BIMSTEC has a deep connect with Buddhism, which originated in South Asia and then travelled and rooted itself in South East Asia. Buddhism constitutes a bridge between South and South-East Asia.