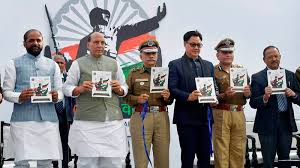 The Union Ministry of Home Affairs (MHA) has launched official anthem for “Bharat Ke Veer” sung and composed by singer Kailash Kher. Bharat Ke Veer is an initiative with corpus fund to help the families of paramilitary troopers killed in the line of duty.  So far, it has raised Rs. 12.93 crore for kin of paramilitary personnel killed in the line of duty

Bharat ke Veer is web portal and mobile application launched by MHA. It is IT based platform to enable willing donors to contribute towards family of braveheart who sacrificed his life in line of duty. The portal is supported by National Informatics Centre (NIC) and powered by State Bank of India (SBI).
The amount so donated through it will be credited to the account of ‘Next of Kin’ of those Central Armed Police Force or Central Para Military Force soldiers. To ensure maximum coverage, a cap of Rs. 15 lakh is imposed on donation and donors will be alerted if amount exceeds, so they can choose to divert part of the donation to another account or the corpus.
Bharat Ke Veer corpus will be managed by committee made up of eminent persons of repute and senior Government officials. The committee will decide to disbursement of fund equitably to braveheart’s family on need basis.