Bangladesh, China agree to elevate their ties to strategic partnership 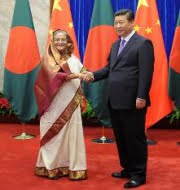 What is One Belt, One Road (OBOR) Initiative?