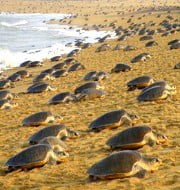 Olive Ridley turtle (Lepidochelys olivacea) is smallest and most abundant of all sea turtle found in world. It gets its name from its olive coloured carapace, which is heart-shaped and rounded. It is best known for their unique mass nesting called Arribada, where thousands of females come together on the same beach each year to lay eggs.
It is found in warm waters of Pacific and Indian oceans. They are found along both-eastern and western coasts of India. It spends entire lives in ocean and migrates thousands of kilometers between feeding and mating grounds in course of a year.

Olive Ridley turtles commence their journey from Indian Ocean towards Bay of Bengal during their mating season in October and November every year. A single female can lay upto 100 to 150 eggs in a pit dug on beaches. Six weeks later these eggs hatches and newly hatched turtles start journey to their Indian Ocean habitat.

Accidental killing of adult turtles through entanglement in trawl nets and gill nets due to uncontrolled fishing during their mating season around nesting beaches. Poaching for meat, shell and leather, and their eggs. Development and exploitation of nesting beaches for ports and tourist centres.

Though found in abundance, their numbers have been declining over the past few years. It is included in Vulnerable category by the IUCN Red list. In India, it is protected under Schedule I of Wildlife (Protection) Act, 1972. Moreover, trading in its products are banned under CITES.