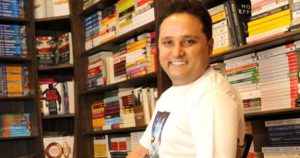 Renowned Author Amish Tripathi has been named as the new director of London’s Nehru Centre, under Indian Council for Cultural Relations (ICCR).

He is the author of best-selling books such as ‘Secret of the Nagas’ and ‘Sita – Warrior of Mithila’.

His appointment is being expected to bring more visibility to ICCR’s flagship cultural centre and will make every centre under ICCR to be more vibrant and proactive to generate a proper understanding of the Indian culture abroad.

The Nehru Centre is a cultural centre located at the South Audley Street, London in United Kingdom (UK).

It was established in 1992 with the goal of promoting cultural exchange between India and UK.

Famous personalities associated with centre include- Gopalkrishna Gandhi served as its founder director and Playwright-actor Girish Karnad was among prominent people to have helmed the centre.

Most of the directors to Nehru Centre’s have been political appointees. Diplomat Pavan Varma was 1st bureaucrat to head cultural wing of Indian high commission in London, UK and was appointed as its director in 2005.