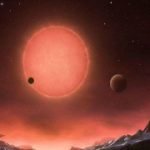 It is group of stars which hosts an Earth-like habitable planet — Proxima Centaur b — orbiting within (Proxima Centauri) its habitable zone. It is a cool dwarf star located around 4.25 light years away from the Earth. It was discovered in 2016.

The massive coronal explosion has sent out powerful solar flare having energy of 10-raised-to-30 ergs, about 100 times a typical solar flare. Such powerful flaring may have produced large radiations and particles which may significantly influence the atmosphere of the Proxima Centauri b and affect its habitability.
The habitability of Proxima Centauri especially its ability to sustain its atmosphere and in particular to sustain water in liquid form may get affected due to abnormal planetary atmosphere heating due absorption of  the high-energy photons like the ultraviolet (UV) and X-ray photons released by the coronal explosion.
If such a massive flare occurs in our Sun, it might have a devastating effect on power grids, interrupt broadcasts and electricity, affect electronic instruments, and cause excess UV radiation in space.
Coronal explosion: is an unusually large release of plasma and magnetic field from the solar corona. They often follow solar flares and are normally present during a solar prominence eruption. The plasma is released into the solar wind, and can be observed in coronagraph imagery.