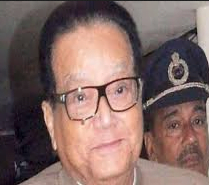 The MLA of Sivasagar constituency in the state of Assam, Pranab Kumar Gogoi recently passed away. He had also served as the Speaker of the Assam state assembly.

The noted legislator was born in 1936 and was an advocate by profession. He was a veteran member of the Congress Party and was first elected to the state assembly in 2001. He was known for introducing the definition of the term “Assamese”, during the previous term of Congress government in the state.