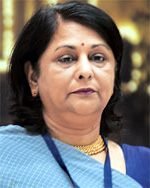 President Pranab Mukherjee has appointed former IAS officer Alka Sirohi as chairman of Union Public Service Commission (UPSC) as per Article 316 of Constitution.
She will replace Deepak Gupta who demits office on 20th September 2016. She will be in office till completion of her term as member on January 3, 2017.