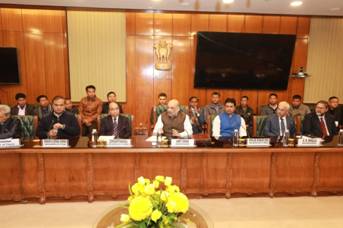 The 23-years old Bru-Reang Refugee Crisis ended on Thursday, 16th January 2020 following the signing of an agreement in New Delhi between the Government of India, State Government of Tripura, Bru-Reang representatives and the State Government of Mizoram. The Union Minister of Home Affairs, Amit Shah presided over the historic signing that is in line with the vision of the Prime Minister of India, Narendra Modi for the empowerment of the people of the North-Eastern region of the country through policy-level interventions.

With the aid of the Central Government, under the agreement signed, at Tripura, about 34,000 Bru Refuguess will be settled for them the Government of Tripura will be providing land, as the Central Government through a package of Rs 600 crores will help in their rehabilitation and development. The Minister informed that residential plots of 40×30 sq.ft will be provided to the displaced families along with free ration for 2 years, to build their houses Rs 1.5 lakh assistance. Rs 5 thousand per month for 2 years along with a fixed deposit of Rs 4 lakh will be provided.