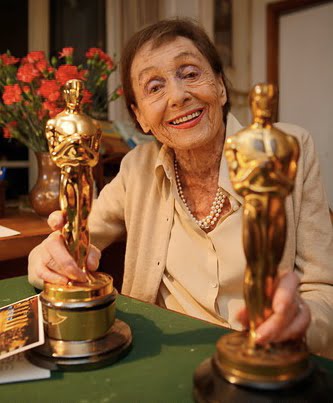 Actress Luise Rainer passed away in London, UK. She was 104.
She was born on 12th January 1910 in Vienna, Austria. She was renowned German-born Austrian and American film actress of cinema’s golden era.
Acting career: Rainer began acting career in 1926, in Germany at early age 16 under innovative Austrian director Max Reinhardt and had appeared in several German films.
Her first American film role was in Escapade in 1935. But her film’s The Great Ziegfeld and The Good Earth made her star in acting world
Awards:  She is first person to win an acting Academy Award (Oscars) in consecutive years, taking best actress prizes for the 1936 film “The Great Ziegfeld” and “The Good Earth” in 1937.
This feat of winning consecutive Oscars is achieved by only 5 actors in awards history to date. They are: Luise Rainer, Spencer Tracy, Katharine Hepburn, Jason Robards and Tom Hanks.