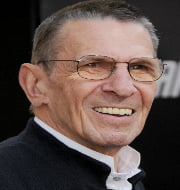 Acclaimed US actor Leonard Nimoy passed away on 27 February 2015 in Los Angeles. He was 83 and died of end stage chronic obstructive pulmonary disease.
He was best known for his half-human, half-Vulcan character of Mr Spock in the cult sci-fi series Star Trek.