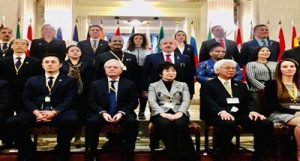 An Indian parliamentary delegation led by Lok Sabha Speaker Om Birla is taking part in the 6th Parliamentary Speakers’ Summit of the G20 countries, being held in Tokyo, Japan from 3-5 November 2019. The summit is being attended by Presiding Officers of Parliaments of G20 countries.

The Parliamentary summit is unofficially called P20. It was jointly hosted and organised by Inter-Parliamentary Union (IPU), an international organisation (headquartered in Geneva) and the House of Councillors of National Diet of Japan.

The summit will have sessions on separate themes pertaining to trade, technology and sustainable development.

At the end of the summit, a joint statement will also be adopted by the Parliamentary speakers attending the meet. The statement thus adopted would act as Parliamentary inputs to the main G20 Heads of Government/States Conference to be held in 2020.