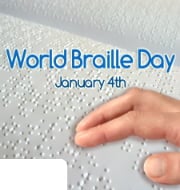 Every year World Braille Day is being observed across the world on 4 January to mark the birth anniversary of Louis Braille, inventor of Braille script or Braille code.
Observance of the day helps people to spread the importance of Braille language and also help people to produce works in this language to allow visually impaired people to read the works.
To commemorate this day several NGOs as well as other organizations come together to raise awareness about the apathy towards blind people and to help them be equal among rest of the people.