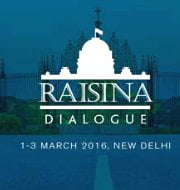 The third edition of the geo-political conference – Raisina Dialogue was held in New Delhi. It was inaugurated by Israeli Prime Minister Benjamin Netanyahu.
The event is jointly organised by the Ministry of External Affairs (MEA) and Observer Research Foundation (ORF). The theme of the conference for this year is ‘Managing Disruptive Transitions: Ideas, Institutions and Idioms’.

Raisina Dialogue is an annual conference held in New Delhi. It is envisioned to be India’s flagship conference of geopolitics and geo-economics. The name of conference comes from Raisina Hill which is the elevation in New Delhi where presidential palace of India, Rashtrapati Bhavan is located.
It is organized on the lines of the Shangri-La Dialogue held in Singapore. It is structured as a multi-stakeholder, cross-sectorial conclave, involving policy and decision makers, including cabinet ministers from various Governments, high-level Government officials and policy practitioners, leading personalities from business and industry etc.
The conference is held jointly by Ministry of External Affairs and the Observer Research Foundation (ORF), an independent think tank based in India. The first edition of conference was held in March 2016 with theme “Asia: Regional and Global Connectivity”. The second edition of conference was held in January 2017 with the theme “The New Normal: Multilateralism in a multipolar world”.