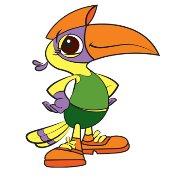 35th National Games mascot Ammu- the Great Hornbill, has made into the Limca Book of Records.
It made into the record books owing to a play Kalikkunna Kuttikalkkayi Bharatham Kathirikkunnu (India Awaits Children Who Play) in which Ammu is featured as lead role.
According to the Limca Book’s 2015 Special Literature Edition, this play is about a mascot, which had been staged in most number of schools. By 9 April 2014, the play had been staged in 147 schools across seven districts of Kerala.
Kalikkunna Kuttikalkkayi Bharatham Kathirikkunnu is scripted and directed by theatre artist Anil Karetee and enacted by a team of police officers. It was envisaged to promote sports among children and persuade them to take up sports along with academics.

About Ammu- the Great Hornbill mascot