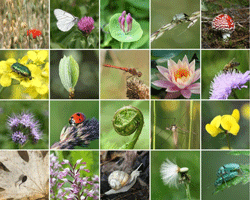 The term Biological Diversity was first coined by wildlife scientist and conservationist Raymond F. Dasmann in 1968. This term became widespread in use during 1980s. Biodiversity refers to the “totality of genes, species and ecosystems of a region”. There are three levels of biodiversity viz. species diversity, ecosystem diversity and genetic diversity.  The term biodiveristy is used to address several problems in conservation of environment including loss of species, destruction of habitats, invasive species, genetic pollution, over exploitation and effects of climate change on biodiversity.
The spatial distribution of organisms, species and ecosystems is called Biogeography.  Biodiversity is unequally distributed on Earth and it varies across regions on the basis of climatic and geographical factors. On earth, highest biodiversity is found in tropics. In comparison to Oceans, terrestrial biodiversity is much greater. It is estimated that there are 8.7 million species on earth of which 2.1 million live in Oceans while rest are terrestrial. The terrestrial biodiversity is greater at equator in comparison to poles. Around 90% of world’s biodiversity is found n tropical rainforests which occupy less than 10 percent of Earth’s surface. The marine biodiversity is highest along the coasts in the Western Pacific which is known for highest sea temperature. Around 70% of World species are found in 12 countries viz.  Australia, Brazil, China, Columbia, Costa Rica, Congo, Ecuador, India, Indonesia, Madagascar, Mexico and Peru.