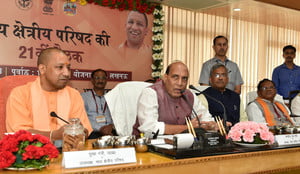 The 21st Central Zonal Council meeting was held in Lucknow, capital of Uttar Pradesh. It was chaired by Union Home Minister r Rajnath Singh. It was attended by Chief Ministers of Uttar Pradesh, Uttarakhand while representative ministers of Madhya Pradesh and Chattisgarh.

The Council discussed various issues including road transport, Pradhanmantri Gramin Sadak Yojna, measures to tackle Naxal violence, modernization of Police, infrastructure development of airports, minimum support price, National health mission and issues related to primary schools.  Total 22 issues were discussed out of which 17 were resolved and on three issue directions were given, rest 2 issues between the states will also be resolved very soon.

Zonal Councils were set up under States Reorganization Act, 1956 (thus, they are not constitutional bodies unlike Interstate Council, but are statutory bodies) to foster Inter-State co-operation and co-ordination among the States. The idea of zonal councils emerged during course of debate on report of States Re-organisation Commission 1956 (headed by Fazl Ali). Originally five councils were created as per States Reorganization Act 1956 as follows:

Zonal Councils provide common meeting ground for States to promote and facilitate coordinated efforts for fostering economic and social development. They serve regional fora of cooperative endeavour for States linked with each other geographically, economically and culturally. They are mandated to discuss and make recommendations on matters of common interest in field of economic and social planning, linguistic minorities, border disputes and inter-State transport etc.
Composition of Zonal council: Union Home Minister is Chairman of Zonal Councils. Chief Ministers of States included in each zone act as Vice-Chairman of respective zone by rotation, each holding office for period of one year at time.
Significance of zonal councils
They help to develop the habit of cooperative working among these States. It also facilitate to create healthy inter-State and Centre-State environment with view to solve inter-State problems and foster balanced socio economic development of respective zones.
Special Note: The north eastern states are not included in these five zonal Councils. Their special problems are looked after by North Eastern Council, set up under North Eastern Council Act, 1972. It is also headed by Union Home Minister.

The Bhakti Movement Saint Guru Ravidas Jayanti is being observed on February 27, 2021 across the cou...

The Defence Minister of India, Rajnath Singh, has launched the e-Chhawani portal on February 16, 202...