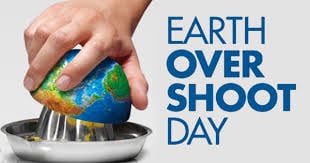 2018 Earth Overshoot Day will fall on August 1, the earliest date since ecological overshoot began in early 1970s. It is date when humanity annual demand on nature exceeds what Earth can regenerate over the entire year. It is calculated by Global Footprint Network and World Wide Fund for Nature (WWF).

This year the overshoot day falls two days earlier than the last year’s. Every day after August 1 will now be considered as strain on Earth’s natural resources. In 2018, nature’s budget for entire year has already been used up in just span of 8 months only. It means humanity is currently using nature 1.7 times faster than Earth’s ecosystems can regenerate. It shows that mankind and human actions are putting unprecedented pressure on environment and its resources. This has been prime cause of overshoot day constantly moving up calendar from late September in 1997 to its earliest yet in 2018. This day depicts that 1.7 earths will be required by humanity to satisfy its exploitative needs keeping in mind current rate of consumption and waste production. The costs of ecological overspend include biodiversity loss, soil erosion, deforestation, fresh water scarcity collapsing fisheries, and buildup of carbon dioxide in atmosphere, leading to vicious circle of climate change and more unprecedented climate including severe droughts, hurricanes and wildfires.

It is an international nonprofit organization founded in 2003 to enable a sustainable future where all people have opportunity to thrive within the means of one planet. It develops and promotes tools for advancing sustainability, including ecological footprint and biocapacity, which measure amount of resources we use and how much we have. These tools aim at bringing ecological limits to center of decision-making.