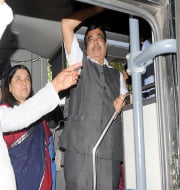 Besides, it was also announced that Union Ministry of Transport is going to issue a notification making it mandatory for public vehicles with seating capacity of 23 or above to have CCTV camera, panic buttons and Vehicle Location Tracking  (VTS) Device. Those public vehicles with seating capacity of less than 23 will be required to have VTS device and emergency buttons. The ministry already has issued a draft notification in this regard.