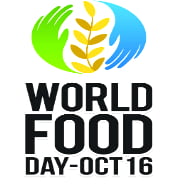 The World Food Day is observed globally on 16 October to mark foundation of Food and Agriculture Organisation (FAO) of the United Nations in 1945.
Significance of Day: It aims to raise public awareness about hunger challenges and encourage people around the world to take action in the fight against hunger.
2016 Theme: “Climate is changing. Food and agriculture must too”. It highlights the issue of food security related to climate change. It calls adopting sustainable practices for growing more food with less area of land and use natural resources wisely.
Background: The World Food Day was established in November 1979 by FAO’s Member Countries at the 20th General Conference of FAO to raise awareness of the issues behind poverty and hunger. For the first time it was celebrated on 16 October 1981 and the idea of celebrating the WFD worldwide was mooted by Hungarian Delegation to FAO.

About Food and Agriculture Organisation (FAO)