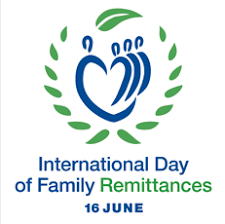 The International Day of Family Remittances (IDFR) is observed every year all across the world on 16 June. The day recognizes the contributions made by more than 200 million migrants towards improving the lives of their 800 million family members back home, and also to create a future of hope for their children.

About International Day of Family Remittances

Objective: Through the observance of IDFR, the United Nations (UN) seeks to create greater awareness about impact remittances have on millions of households, as well as on communities, countries, and entire regions. IDFR also calls upon governments, private sector entities, and civil society, to find ways that can maximize impact of contributions made in form of remittances by individuals and collective actions.

Custodian: The custodian of IDFR towards these objectives is United Nations International Fund for Agricultural Development (IFAD).

IFAD supports #FamilyRemittances2030 Campaign, to allow all stakeholders to endorse the values day represents and to showcase their engagement.

Significance: IFDR furthers 2030 Agenda for Sustainable Development and Sustainable Development Goals (SDGs). The day is fully recognized at global level, as well as included as one of key initiatives to implement newly-adopted Global Compact for Safe, Orderly and Regular Migration (GSM), which also calls for financial inclusion through remittances, reduction of remittance transfer costs, and covering all dimensions of international migration in a holistic and comprehensive manner.

It is an specialized United Nations (UN) agency that was one of the major outcomes of World Food Conference 1974. Later in 1977, it was set up as an international financial institution.

It is based in Rome (Italy), which is considered to be UN’s food and agriculture hub.

Since 1978, IFAD have provided US$18.5 billion in grants and low-interest loans to projects that have reached to more than 464 million people.

It is a transfer of money, commonly by a foreign worker to an individual in their home country. The money sent home by migrants (working in foreign country) competes with international aid as one of the largest financial inflows to developing countries.

India is the world’s top recipient of remittances.