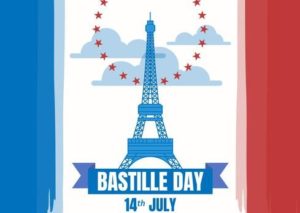 Every year France celebrates 14 July as National Day of France also known as Bastille Day. It is commemorated the anniversary of Storming of the Bastille during French Revolution on 14 July 1789.

The Day celebrates storming of Bastille in Paris, which signaled start of French Revolution and became an important symbol for French Republican movement. It is the French National day and is formally called La Fete Nationale in France.

On the occasion of day many public events take place but most famous event is Bastille Day Military Parade. It takes place in morning of 14 July in Paris. The 1st parade was in 1880. Today the parade runs down Champs-Elysees from the Arc de Triomphe to Place de la Concorde at the end of which French President and many foreign ambassadors wait and greet military.

The Bastille was a medieval armory, fortress, and political prison in Paris. To many of common people, it represented all that was wrong with monarchy and was a symbol of monarchy’s abuse of power. On July 14, 1789 soldiers stormed Bastille and took over it. This signaled the start of French Revolution and three years later in 1792 French Republic was formed.

On day Bastille was stormed it held only seven prisoners as it was only big enough to hold around 50 prisoners.

Bastille Day1st became a national holiday in France in 1880 after being proposed by French politician Benjamin Raspail. This was also year of 1st Bastille Day Military Parade.