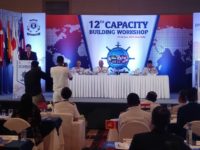 The ReCAAP Information Sharing Centre (ISC), in cooperation with its India Focal Point, the Indian Coast Guard (ICG), began its 12th Capacity Building Workshop from 19 to 21 June 2019, in New Delhi, India. In two-day capacity building workshop 31 International delegates from 19 maritime law enforcement and regulatory authorities from Asia and beyond are participating.

The ISC organizes Capacity building workshop annually and is co-hosted by one of the Contracting Parties. The 12th workshop is co-hosted by ICG and ReCAAP IFC is being attended by officials of concerned ministries and members of Diplomatic Corps.

Objective: of workshop is to share updated situation of piracy and armed robbery against ships in Asia and other best practices of Asian countries.

During the course of workshop all participants will be trained on various issues related to piracy and armed robbery like international laws, prosecution process, forensics and emerging threats.

ReCAAP & India: Capacity building remains one of the most significant pillars of cooperation under ReCAAP agreement and India has played a leading role in this aspect by hosting this workshop for a third time (earlier in November 2011 at Goa and December 2017 at New Delhi). Indian agencies especially ICG have been actively involved in ensuring safe and secure seas for seafarers.

ReCAAP is an abbreviation for Regional Cooperation Agreement on Combating Piracy and Armed Robbery against Ships in Asia (ReCAAP).

It is 1st regional government to government agreement to enhance and promote cooperation against piracy and armed robbery against ships in Asia.

Function: It strive towards developing cooperative framework to address menace of piracy and armed robbery by facilitating information exchange between various stakeholders.

At 12th Governing Council Meeting in 2018, council announced that ReCAAP ISC has met criteria to be Centre of Excellence for information sharing in combating piracy and armed robbery against ships at sea.