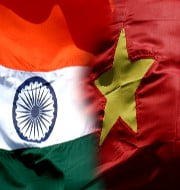 Vietnam has granted ONGC Videsh a two-year extension to explore oil block 128 in the South China Sea. The permission was first granted in the year 2006 which is due to expire in mid-June.
The part of the oil block 128 is in the U-shaped ‘nine-dash line,’ the area which is claimed by China. The area is also a route for more than $5 trillion in trade every year and is also claimed by the Philippines, Brunei, Malaysia and Taiwan.
In the areas south of block 128, the drilling works have already commenced. The block is owned jointly by Vietnam’s state oil firm, Spain’s Repsol and Mubadala Development Co of the United Arab Emirates.

Despite sharing common communist ideology and growing trade, China and Vietnam have competing maritime claims and centuries-old mistrust. China has been opposing Vietnam’s drilling activities in the South China Sea and has opposed to its unilateral, illegal oil and gas activities in the South China Sea in which it has territorial claims.
China is also concerned at Vietnam’s evolving security relationships with the United States and Japan. Both United States and Japan has been offering moral support to Vietnam and helping Vietnam’s coastguard.
South China Sea Dispute
China has been aggressively claiming the entire South China Sea as its own. The other countries that claim the various territories in the South China Sea are Taiwan, Indonesia, Vietnam, Philippines, Thailand, Malaysia, Singapore and Brunei. The South China Sea is part of Pacific Ocean spreading an area of some 35 lakh square km with eight littoral countries/territories viz. China, Taiwan, Philippines, Malaysia, Indonesia, Brunei, Singapore and Vietnam. It is strategically located in the international shipping route that sees the passage of world’s half of the merchant ships.
India-Vietnam
Vietnam has welcomed India to play a bigger role in Southeast Asia and specifically, the South China Sea. Vietnam is following the strategy of seeking many partnerships with big powers while avoiding formal military alliances.
India has provided naval patrol boats, satellite cover to monitor Vietnam’s waters and training for its submarines and fighter pilots. India is providing more military support than it is currently offering to any other South-east Asian country. Further, under the $500 million defence credit line announced by India last year, India will transfer naval vessels and missiles to Vietnam.