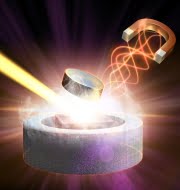 Researchers’ team from Tata Institute of Fundamental Research (TIFR) have discovered that bismuth semi-metal in bulk form becomes a superconductor.
The team was lead by Dr. S. Ramakrishnan of the Department of Condensed Matter Physics and Material Sciences at TIFR, Mumbai.

What researchers have discovered?

They have discovered that when temperature of bismuth semi-metal in bulk form is lowered to 530 microKelvin (about -273 degree C), it becomes a superconductor. It acts as superconductor at temperature three orders of magnitude higher than the theoretical prediction.

Superconductors are materials that conduct electricity with no resistance whatsoever. In order to achieve superconducting state, the element should have mobile electrons, and these electrons should come together to form pairs, known as Cooper pairs.