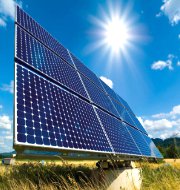 Researchers from IISER-Thiruvananthapuram and IIT-Indore have jointly developed an artificial light-harvesting system that will help capture solar energy.

About the artificial light-harvesting system

Why is the new artificial light-harvesting system significant?

Scientists have long sought to mimic the process of photosynthesis (the process through which plants absorb sunlight and produce sugars) to be used in solar cells or artificial leaves. Many have tried to replicate the molecular and atomic structure of light-harvesting mechanism of plants in the laboratory environment. They have made use of polymeric structures, detergent-type molecules, vesicles, gels, and other bio-inspired structures to achieve this feat. Most common hurdle faced by these technologies is the aggregation or clumping of the molecules, which makes it difficult to effectively capture and conserve the light.

The new artificial photosynthetic system makes use of clusters of silver with a nanometer dimension, which is a hundred thousand times smaller than the width of human hair. These silver nanoclusters have complicated and exotic photophysical properties. The researchers were able to stabilize them with bulky ligands and entrap the entire ensemble inside another larger molecule called cyclodextrin. This is the first time that an atom-precise nanoclusters were used for this application. It provides 93 per cent effective energy transfer because of the presence of opposite charges on the surface and the matched electronic energy distribution. The harvested energy can generate currents having higher yields than individual components.

The new technology paves the way for designing of new light-harvesting materials that can improve the efficiency of solar cells and minimize the energy loss. Such technologies will help countries achieve their net zero carbon emissions and meet future energy needs through renewable energy sources.