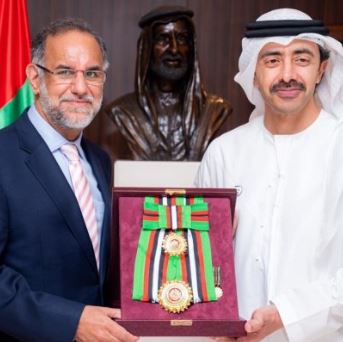 The outgoing Indian Ambassador to the United Arab Emirates (UAE), Navdeep Singh Suri was conferred with the First Class Order of Zayed II Honour in recognition of his efforts and contribution to the development and strengthening of bilateral ties between India and UAE. It is a rare honour given to any diplomat.

Mr Suri has also served as head of West Africa and Public Diplomacy divisions at the Ministry of External Affairs.

Mr Suri had earlier held the position of Ambassador to Egypt and High Commissioner to Australia.

Prime Minister Narendra Modi was conferred with the Order of Zayed during his visit to the UAE earlier. The award constituted in the honour of Sheikh Zayed bin Sultan Al Nahyan, founding father of UAE is the highest civilian award of UAE. PM Modi was honoured for his contribution in strengthening relations between India and UAE.