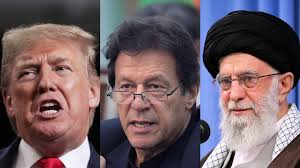 For de-escalating and resolving tensions between Washington and Tehran, a neighbor of Iran, Pakistan is trying to insert itself on a mediating role as its Foreign Minister, Shah Mehmood Qureshi will be on a two-day visit to the United States starting on Wednesday, January 15, 2020. New York is said to be the first stop of the Pakistani Diplomat as informed on Tuesday by Stephane Dujarric- spokesperson of the United Nations (UN) Secretary-General, Antonio Guterres that a meeting has been requested by the Pakistan mission to the UN between the Pakistan Foreign Minister and the UN Secretary-General, which is likely to take place.

Earlier on Sunday, 12th January 2020 the Pakistan Minister met his Iranian counterpart and the President of Iran, Hassan Rouhani in Tehran and had also had a meeting with the Foreign Minister of Saudi Arabia at Riyadh on Monday. As the Pakistan Minister heads to the US for regional peace and stability, 2 Katyusha rockets hit al-Taji military base hosting the US troops, around 20 Km from the capital of Iraq, Baghdad late on Tuesday.