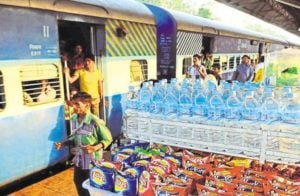 Railway Protection Force (RPF) recently launched ‘Operation Thirst’ to stop selling of unauthorised Packaged Drinking Water (PDW). During the operation, which was carried out on 8 and 9 July 2019 fines were imposed on those found guilty and many were arrested.

It was launched by Railway Protection Force (RPF) as an all India drive to crackdown selling of unauthorised Packaged Drinking Water (PDW) in Delhi.

Areas: As per RPF, operation was launched in all major railway stations across the country to curb menace of unauthorized Packaged Drinking Water inside railway stations.

Implementation: During the operation, a total fine amount of Rs. 6,80,855 has been realised from offenders and 4 pantry car managers involved in selling of spurious mineral water was also arrested. Also many stalls on platforms which were found selling of PDW bottles of brands were found to be not authorized by Indian Railways.