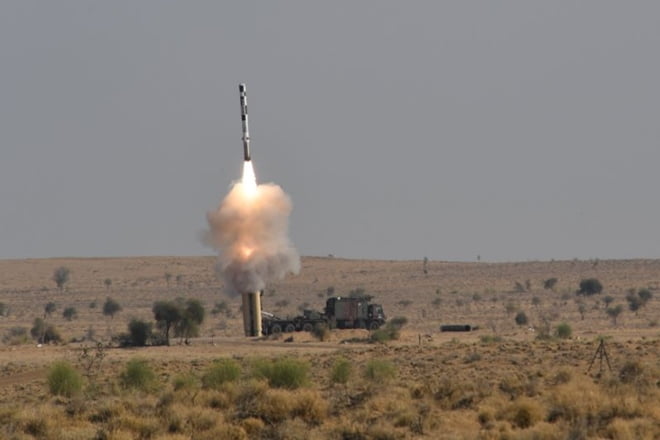 Supersonic cruise missile BrahMos was successfully flight-tested for first time with indigenously developed seeker at Pokhran test range, Rajasthan. So far, seeker, a critical technology in missiles was imported from Russia. During the test missile with India-made seeker flew in its designated trajectory and target with pin-point accuracy.

The seeker technology determines the accuracy of missile and is closely guarded secret. The indigenous seeker was developed by Research Centre Imarat (RCI), Hyderabad, in collaboration with other DRDO labs. It is considered as significant milestone in indigenous missile technology and would reduce import dependence.

It is supersonic cruise missile developed by joint-venture between Russia’s Mashinostroyenia and India’s DRDO. It has been named after two rivers Brahmaputra and Moskva (river in western Russia).
It is two-stage missile, the first one being solid and the second one ramjet liquid propellant. It operates on ‘fire and forget principal’. It is capable of being launched from land, sea, sub-sea and air against sea and land targets.
It is capable of carrying warhead of 300 kilogram (both conventional as well as nuclear) and has top supersonic speed of Mach 2.8 to 3 (roughly three times speed of sound). It is hailed as the world’s fastest anti-ship cruise missile in operation.  Its range was initially capped at 290 km as per obligations of Missile Technology Control Regime (MTCR). Since India’s entry into the elite club, its range was extended to 450 km and plan is to increase it to 600km.
It is self-propelled guided missile that sustains flight through aerodynamic lift. It is claimed that the missile has strike accuracy rate of 99.99% and it follows a variety of trajectories like high, high-low, low, surface-skim etc. It has been already inducted in Army and Navy. The air-launched version of missile was test-fired recently for the first time from modified Su-30MKI aircraft.