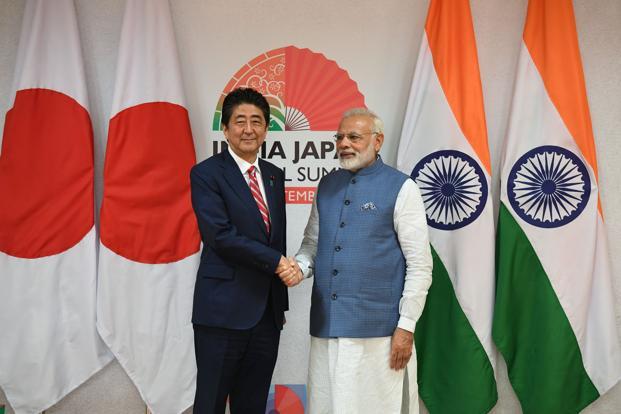 Foundation stone of India’s first high-speed rail project (bullet train) project was jointly laid by Prime Minister Narendra Modi and his Japanese counterpart Shinzo Abe at Sabarmati Station ground in Ahmedabad.
The 508km-long Mumbai to Ahmedabad High Speed Rail (MAHSR) Project will be built at cost of Rs 1.10 lakh crore. It is expected to be completed by 2022 (It was recently advanced by year from earlier deadline of 2023).

Speed: The train will cover distance of over 508 km from Sabarmati (Gujarat) to Bandra (Mumbai, Maharashtra) in around 2.58 hours at high speed of 320 kph from the existing 7-8 hours. In case of rapid high-speed, it will cover the distance in 2.07 hours.
Stations: On the Ahmedabad-Mumbai route, 12 stations have been proposed: Mumbai, Thane, Virar, Boisar, Vapi, Bilimora, Surat, Bharuch, Vadodara, Anand, Ahmedabad and Sabarmati.
Route: For most of its route — 471 km out of 508 km, train will run at elevation of 18 metres — primarily to ensure it travels over the existing railway route. The remaining 37 km includes 7 km undersea stretch between Thane and Vasai and 15 km underground route in Mumbai. It will be India’s longest tunnel (around 21-km-long) – that will be dug between Boisar and Bandra Kurla Complex (BKC) in Mumbai.
Funding: Of the total project cost of Rs.1,10,000-crore, 80% cost of Rs 88,000 crore will be provided by Japan International Cooperation Agency (JICA) as soft loan at interest of 0.1% per annum. This loan will be repaid to Japan in 50 years, with 15 years grace period.
Make In India: As per agreement between India and Japan, MAHSR Project has “twin, complementary objectives viz. localised manufacture and transfer of technology. It will give stimulus for advanced components’ manufacture and construction, one of the stated objectives of the project is Make in India. It will create around 15 lakh new jobs in India.

Both leaders also laid foundation stone of High Speed Rail Institute to be set up at Vadodara (Gujarat). This institue will come up inside National Academy of Indian Railways (NAIR) at Vadodara where more than 4000 enginees of High Speed Rail Corporation of India will be given training by Japanese professionals.

The Indian Railways will launch country’s second high-speed train project between Delhi and Amritsar (Punjab) via Chandigarh. The project will be completed by 2024. Train on this route will run on standard broad gauge and cover 458-km-long route in 2 hours and 30 minutes running at a speed of 300-350 kmph, reducing travel time by about two and half hours between both destinations. Proposed stops on this route are Ambala, Chandigarh, Ludhiana, Jalandhar.