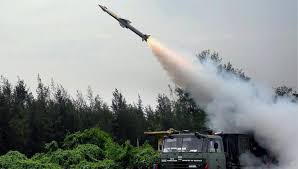 On November 13, 2020, India test fired all-weather Quick Reaction Surface-to-Air-Missiles at the Chandipur Test Fire Range. It is called QRSAM and is a canister-based system.

It is stored and operated from specially designed compartments. The inside environment of canister-based systems are controlled. This makes the storage of these missiles easier. Also, these systems have increased shelf life.

Increasing Shelf Life of missiles is a part of modernization of Indian Army.

QRSAM consists of an Active Array Battery Surveillance Radar, a launcher and an active array battery multifunction radar. The radars have 360-degree coverage with ‘track on move’ and ‘search on move’ capabilities.