Fisheries Sector: ₹ 400 Crore Investment to be made in Goa 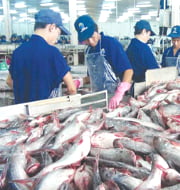 The Union Fisheries Minister Giriraj Singh announced on February 7, 2021 that an investment of ₹ 400 crore will be made in Goa to make this state a fisheries hub of India.

This industry in India employs 145 million people. The country ranks second in aquaculture while it is ranked third in the fisheries production. Fisheries sector amounts to 1.07% of the Total GDP of India.