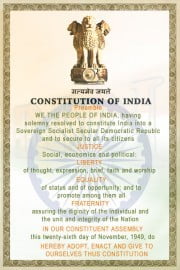 Some facts about Indian Constitution

Indian Constitution is supreme law of India, which lays down framework that defines political principles, establishes structure, procedures, powers and duties of Government institution. It is core legal document which has nearly 448 articles or provisions in 25 parts, 12 schedules. It is living fundamental document which makes the government system work effectively. It lists out fundamental rights of citizens, duties, role of the government, powers of prime minister, president, governor and chief minister, interaction between the government and its citizens and defines how the federal structure of the country will be maintained. It also defines the powers of the legislature, the executive and the judiciary. The key feature of the Constitution is separation of powers while keeping a check on each arm of the government. Indian Constitution is the longest written constitution of any sovereign country in the world. It signifies the sovereignty of the people. Its drafters had borrowed concepts and ideas from the Constitutions of UK, US, Germany, Ireland, Australia, Canada and Japan. Dr BR Ambedkar is regarded as the father of the Indian Constitution.