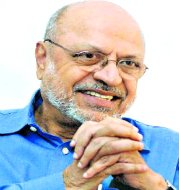 The Union Ministry of Information & Broadcasting has constituted a committee headed by noted film-maker Shyam Benegal to look into revamp the film certification nuances by Central Board of Film Certification (CBFC).
The committee is tasked to suggest recommendations provide a holistic framework and interpretation of provisions of Cinematograph Act, 1952 and Cinematograph (Certification) Rules, 1983.
Other Members of the Committee: Rakeysh Omprakash Mehra, Bhawana Somaaya, Piyush Pandey, Nina Lath Gupta and Joint Secretary (Films) as Member Convenor.

The Committee has been requested to submit its recommendations within two months. Its recommendations would enable those tasked with the work of certification of films to discharge their responsibilities keeping in view the prescribed framework.