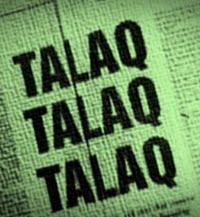 The Union Cabinet has cleared ordinance to make practice of instant triple talaq penal offence. It was signed by President Ram Nath Kovind later as per Article 123 of the Constitution. Compelling reason cited by Government for promulgation of this ordinance was that practice of triple talaq continues unabated even after annulled by Supreme Court due to absence of legal framework.

The ordinance makes instant triple talaq illegal and void. It prescribes punishment with jail term for three years to husbands practicing triple talaq. It also includes certain safeguards such as the addition of a provision of bail for the accused before trial, to do away with fears of misuse of the law.
The offence of triple talaq will only be cognizable when victim wife or her relatives by blood or marriage file FIR. It is compoundable offence, meaning that there can be compromise but only on insistence of wife and t magistrate will have to determine terms and conditions.
The offender can be granted bail by magistrate but only after hearing victim wife as it is private dispute between husband and wife and wife must be heard when bail is granted.  Additionally, victim wife will get custody of minor children. They will be entitled to receive maintenance from husband for herself and children, as decided by magistrate.

In landmark 3-2 verdict in August 2017, five-judge Constitution Bench of Supreme Court had declared centuries-old practice of instant triple talaq or talaq-e-biddat unconstitutional. Triple talaq is practice in which Muslim men divorce their wives unilaterally by uttering talaq three times in quick succession. Three of five judges of this bench had called this practice un-Islamic and arbitrary. They also disagreed with view that triple talaq was an integral part of religious practice. In pursuance of SC verdict, Government had managed to get Muslim Women (Protection of Rights on Marriage) Bill, 2017 passed in Lok Sabha in December 2017 but it got stuck in Rajya Sabha as it was unable to build consensus among political parties where it does not have majority.Government’s position on Triple Talaq always had been that it has nothing to do with faith or mode of worship or religion, but it is pure issue of gender justice, gender dignity and gender equality.