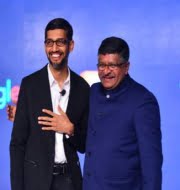 Sundar Pichai, chief executive officer(CEO) of Google LLC was named and promoted as the new CEO of Alphabet Inc on Tuesday, 3rd December 2019.

Google is the largest subsidiary of California based Alphabet Inc. The alphabet was founded on 2nd October 2015 through a corporate restructuring of Google with the aim to make the business of Google internet services cleaner and more accountable. Today Alphabet is the fifth-largest technology company in the world by revenue.

Larry Page and Sergey Brin co-founded Google on 4th September 1998. Since the establishment of Alphabet Inc in 2015, Page was the CEO of Alphabet and Brin as the President. Both deciding to step down to simplify the management structure as Alphabet is now well established.

The Indian American business executive, Pichai Sundararajan, commonly known as Sundar Pichai will take over as the new CEO of Alphabet in addition to his current role as the CEO of Google.