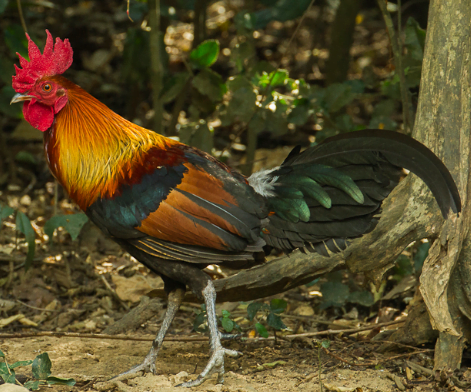 A recent study highlighted the gradual disappearance of the red jungle fowl and the lack of research on this bird species.

The Red Jungle Fowl or Gallus gallus is a tropical bird species that originated in southern and south-eastern parts of Asia. It is one of the primary progenitors of the domestic chicken that are bred widely today. They are noted for their bright red combs and their multi-colored feathers.

The red jungle fowl is reported to have been domesticated in the ancient cities of Harappa and Mohenjodaro between 2500 and 2100 BC. The bird was mainly reared for its fighting abilities. The bird finds mention in several ancient literature like the Vedas and Bhavprakash Nighantu (an Ayurvedic text). It was also valued for its medicinal properties.

Spread of the Species

From ancient India, the fowl spread to other places like Persia (modern day Iran), Egypt, China, Mesopotamia (modern day Iraq), Russia, Europe and even USA. The bird was renamed in local dialects but its origin can be traced back to Sanskrit works ‘kukuth’ or ‘kukutha’. Many of the modern day breeds in USA, Europe and Asia can trace its lineage back to the red jungle fowl.