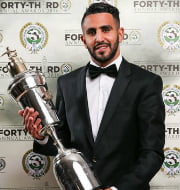 Riyad Mahrez (Algerian origin) became the first African footballer to win the Professional Footballers Association’s (PFA) Player of the Year award.
He was presented the award for the 2015–16 season at the Professional Footballers’ Association awards ceremony organised in London.
With this, Mahrez also became the second non-European, after Luis Suarez (Uruguayan striker) to win this prestigious award in the sport of Football.
Besides Dele Alli FC midfielder Tottenham Hotspur was named as the Young Player of the Year for the 2015–16 season.

About PFA Player of the Year