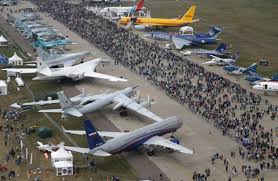 The MAKS Air Show is the largest airshow organized in Russia and the Former Soviet Union every two years. The air show is major opportunity for the Russian and other aircraft manufacturers to showcase their latest innovation and aircrafts before a global audience and sign deals for manufacturing and development.

Contrary to past MAKS Air Shows, the Indian participation at the 2019 MAKS Show was comparatively dull. India is one of the largest consumers of Russian Military hardware and the Indian presence especially that of HAL Tejas & the HAL HJT-36 was missed by several keen aerospace enthusiasts.

However, the Indian trade delegation did take an active part in the Russian Aircraft evaluations and an Indian pilot even flew the MiG-35 aircraft. The MiG-35 was one of the six aircraft under consideration for the Indian Medium Multi-Role combat aircraft tender but eventually lost out to the Dassault Rafale.