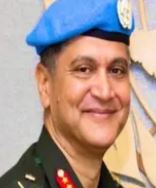 Lieutenant General (retired) Abhijit Guha has been appointed as the Chair of the Redeployment Coordination Committee (RCC) and head of the United Nations Mission to support the Hudaydah Agreement (UNMHA).

RCC is responsible for redeploying forces of Yemeni warring parties in accordance with the Stockholm agreement.

The UNMHA has been mandated to: