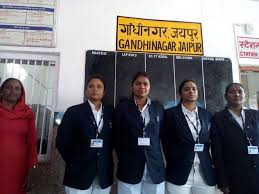 Gandhi Nagar is important railway station in Jaipur situated on Jaipur-Delhi rail route. More than 50 trains pass through the station daily out of which 25 halting at station. The station has footfall of more than 7,000 passengers every day. There are 40 women staff deployed at station besides women personnel of railway protection force (RPF) at station. These women employees have been trained to manage all operations at the station. At this station, 10 women each have been posted in transport and commercial sections, while 4 have been posted for ticket checking, along with total of RPF personnel.