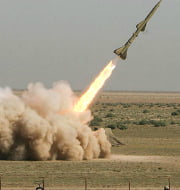 Iran’s Islamic Revolutionary Guards Corps (IRGC) has successfully test-fired several ballistic missiles from silos across the country.
These tests were conducted by IRGC to demonstrate the country’s deterrent power and its ability to confront any threat against the state and the sovereignty of the country.
With this Iran has breached United Nations Security Council (UNSC) resolutions that compel it to refrain from any work on ballistic missiles for 8 years.
Missile test ban

Ballistic Missile: It is a missile with a high, arching trajectory which is initially powered and guided but falls under gravity on to its target. Most of its trajectory is unpowered and governed by gravity and air resistance if it is in the atmosphere. In contrasts, cruise missiles are aerodynamically guided in powered flight.