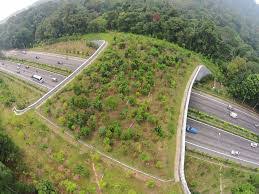 India is to see the first five animal overpasses on the Delhi-Mumbai Expressway. The expressway is under construction.

The animal bridges were planned to avoid disturbances to Ranthambore Wildlife Corridor that connects Mukundra and Ranthambhore Wildlife Sanctuaries. The plan of the animal bridges have been approved by the Central Wildlife Board. The Rajasthan Government has also approved the project. Following these approvals, the NHAI (National Highway Authority of India) has begun the infrastructure activities. The work to construct these animal bridges is to begin by November or December, 2020.

About the Animal Bridges

It is located in Rajasthan. It was declared one of the Project Tiger reserves in 1973. The National Park hosts deciduous forests and wildlife such as Indian Leopard, Bengal Tiger, wild boar, sloth bear, mugger crocodile, etc. The park is bounded by Chambal river in the south and Banas river in the north.

Criteria to create a National Park

A National Park can be created by both central and state governments. However, alteration in boundaries shall be made only through resolution passed by State Legislature.  No human activities are permitted in the national park.

The species that are included in Schedule of Wildlife Act are also not allowed for capturing or hunting in national parks.