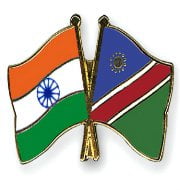 India and Namibia have signed two Memorandums of Understanding (MoUs) during the final leg of President Pranab Mukherjee’s three-nation African visit.
These agreements were signed after a bilateral dialogue between President Mukherjee and his Namibian counterpart Hage Geingob.
The two signed MoUs include

Comment
The Pelindaba treaty prohibits Namibia, fourth largest producer of uranium to implement nuclear agreement with India as it not the signatory of Nuclear Non Proliferation treaty (NPT). India and Namibia had signed an agreement on nuclear energy i.e. deal to supply Uranium for civil use in 2009.